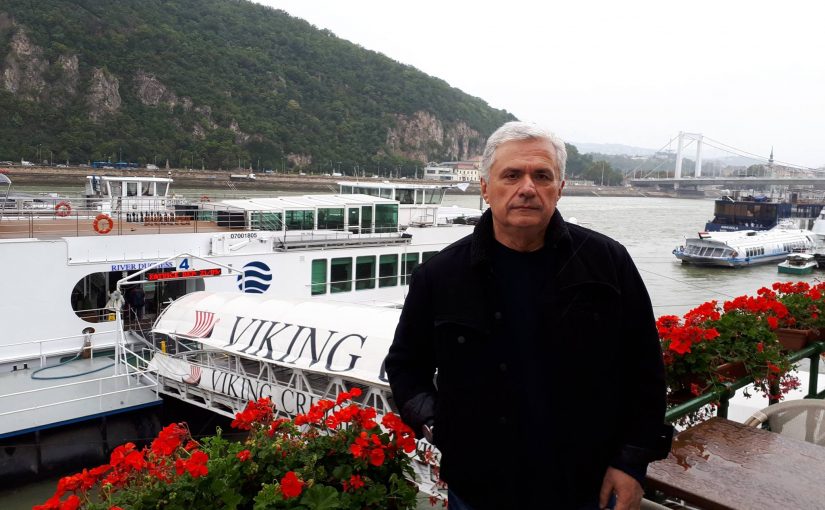 Guram  Mirian Odisharia (born September 24, 1951 in Sukhumi, Abkhazian ASSR) is a modern Georgian poet, writer, playwright, public figure, and laureate of more than ten national and international awards. His works have been translated into more than 20 languages. He is known as an adversary to wars, an active participant in Georgian-Abkhazian, Georgian-Ossetian, Caucasian and European meetings. He is a supporter of peace negotiations and sees that the only way to resolve any serious issues, including political ones, is through dialogue.

Born into a military officer family. His mother was a teacher. In 1975 he graduated from the Faculty of History and Philology of the Abkhazian Pedagogical Institute.

At various times he worked as a journalist in the editorial offices of radio and newspapers. In 1987-1994 he was the editor-in-chief of the literary and public magazine “Ritsa”.

In 2012-2014, he was the Minister of Culture and Monument Protection of Georgia. In 2014, as a minister, he signed a document in Berlin, according to which Georgia became the “Guest of Honor” at the Frankfurt (Germany) Book Fair in 2018.

Since the war in Abkhazia (1992-1993) he has been living and working in Tbilisi. In early October 1993, at the end of the war, he crossed the Saken-Chuber Pass, where hundreds of people died. He described those days in his famous work “The Pass of the Persecuted”.

He is also a conflictologist and has taken part in more than 60 Georgian-Abkhazian, Georgian-Ossetian, Caucasian, international conferences and meetings.

As a writer, he often travels across the Caucasus, as well as Europe and Asia, attends book presentations, gets to know his readers and students.

He has a wife and a daughter.

The first poems and drawings by Guram Odisharia were published when he was still in school (he often illustrated his own books).

He is the author of 10 poetry books. Litterateurs especially appreciated his poetic books: “Hymns for You”, “Call on the Rain” “The Key for the Sea”, “Peace to this House”, “Seven Pictures for a Child”.

Odisharia’s post-avant-garde verses and poems are dictated by the exoticism of his hometown, the surreal landscapes of the sea and the coastal flora. Critics often refer to him as the “poet of the sea.” His poetic works have been translated into more than 10 languages and are published as separate books in several countries outside Georgia.

While living in Tbilisi after the armed conflict in Abkhazia, he published several collections of short stories, publicist letters and 5 novels.

The main themes of his novels and short stories are: the idiosyncrasies of the period after the collapse of the USSR in Georgia and the Caucasus; The essence of war and peace, love and hate at the end of the XX century and the beginning of the XXI century (drawing on the example of Georgia). The funny or tragic stories of the inhabitants of the writer’s hometown before, during, and after the war; Stories of salvation from death and human compassion across divides in the most difficult and extreme situations; The nostalgia for pre-war cohabitation and hopes of those displaced as a result of the armed conflict; The Black Sea as the protagonist of the writer’s prose works and the  multicultural intersection of societies; The search for new visions that pave the way for new horizons and facilitate the  restoration and development of  relations between warring parties.

The play “The Far Away Sea ” based on Guram Odisharia’s play enjoyed popularity (2005, The play was staged by the famous director Temur Chkheidze). In 2010, due to pressure from some high-ranking government officials, the performance ceased to exist as the writer’s ideas for a peaceful settlement of the Georgian-Abkhazian conflict did not correspond to the position of officials. Then the same fate befell the second play “Hello Sukhumi” co-authored by G. Odisharia.

SHORT STORIES  AND  NOVELS  BASED  ON  REAL  STORIES

The Pass of the Persecuted. Germany. Frankfurt. REICHERT VERLAG. 2015 (64 pg)